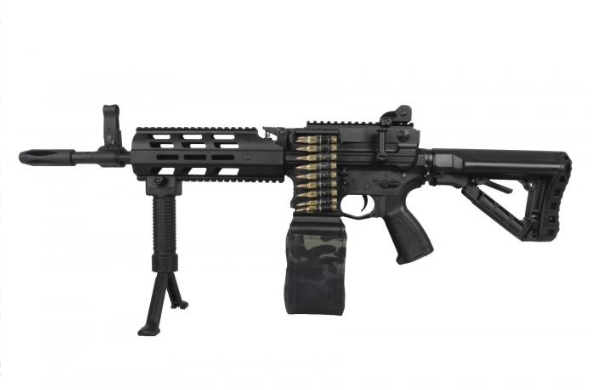 Welcome back to the blog! Today I have another review for you, and in this one, we’ll be taking an in-depth look at the CM16 LMG Stealth by G&G Armament

The CM16 LMG Stealth from G&G Armament is an LMG based on their CM16 M4 – one of their most well-known rifles. The upper and lower receiver are both made from polymer with the addition of an ambidextrous alloy mag release and a folding charging handle. It has an alloy outer barrel and front sight post as well, making it a lightweight build overall. It features an M-LOK handguard which gives players two M-LOK slots on the side and two 20mm rails on the top and bottom. The upper receiver has an LMG-style hinged loading tray that opens up so you can install the dummy bullet belt which makes it look the part. The upper receiver also has a 20mm Picatinny rail for adding sights/scopes. At the front of the gun, at the barrel, we have a 14mm CCW thread for suppressors and tracer units. 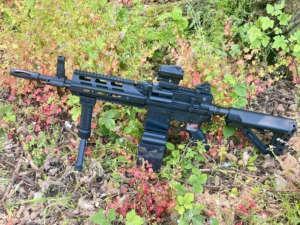 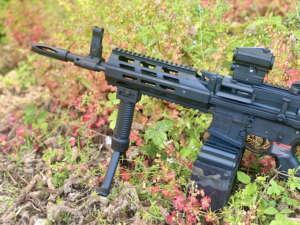 At the rear of the LMG, it has an alloy buffer tube with a six-point G&G Crane Stock which is adjustable to the user. As it’s rear-wired, the stock is where the batteries are housed and it’s pretty roomy which is ideal for bigger capacity batteries such as the Titan Power range. The stock also houses the MOSFET and a small Tamiya connector. The stock features a flip-open storage compartment perfect for storing CR123s (or tactical snacks) and a rubberised butt pad, an alloy sling loop and QD sling sockets.
The G&G CM16 LMG Stealth comes with an electric auto-winding 2,500 round box magazine that uses 2 x CR123A batteries (more about this later!) that has a MultiCam Black cover. As it has an M4 lower, you can also use standard M4 mags should your box mag run out which is a great feature.
Internally, the CM16 LMG Stealth is a top-tech G&G gun. It has the version 2 gearbox, their signature MOSFET and Electronic Trigger Unit (ETU) which means it has a programmable trigger so it is capable of safe/semi/burst/full-auto firing modes. The MOSFET/ETU also has a low voltage detection function which prevents the replica from firing when the battery is too low.
So it sounds like a solid weapon of choice, but how does it perform? The CM16 LMG Stealthpasses chrono with a consistent FPS of 320 FPS on 0.2g BBs which means it’s UK site legal and can transition from outdoors support to indoor CQB work thanks to the semi-auto firing mode and its compact size (compact for an LMG). As for the rate of fire? This varies depending on whether you are using a 7.4v or 11.1v because it has the MOSFET it can comfortably run an 11.1v Lipo battery and this gives it a pretty impressive rate of fire.
The box magazine is pretty easy to use, there is a velcro cover that conceals the battery door – simply remove this, open the battery door and you can install the CR123 batteries. To load the BBs, there is a loading window (where you install the dummy rounds) that opens so you can pour the BBs in. As it is auto-winding, when it is powered, has BBs and inserted it will begin to feed BBs automatically which is a great feature. 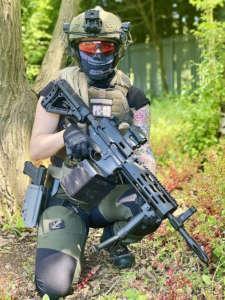 In regards to the programmable trigger, I’ve not had a lot of experience with programmable triggers in the past (I’ve always thought they seemed too complicated) but G&G make it super easy to swap between burst and full auto – you simply hold the trigger down in semi for ten seconds and there you have it.
So, how does it shoot? G&Gs top tier guns have always been great performers and the CM16 LMG Stealth is no different. It fires consistently on long bursts of fire with no jams or feeding issues – whilst I’ve always been pretty sceptical of auto-winding mags but it fed without any issues. The groupings on both full-auto and burst are pretty good and the accuracy on semi is great.
Is there anything I don’t like about it? I don’t like how the bipod looks so I wouldn’t run that in a game and I also think the flash hider looks a little cheap so I would definitely swap that out but that’s about it. It does the job intended well so you can’t complain about it.
In the box, you get the G&G Armament CM16 LMG Stealth with a 2500 round Box Magazine, dummy rounds and a bipod foregrip. It retails for £389.99 from Extreme Airsoft which is a great price point. I think this lightweight LMG is perfect for airsofters new to a support role, those with a smaller frame or those looking for a budget-friendly LMG. If you use my code ‘femmefatale’ at the check out you can get 5% off your purchase!