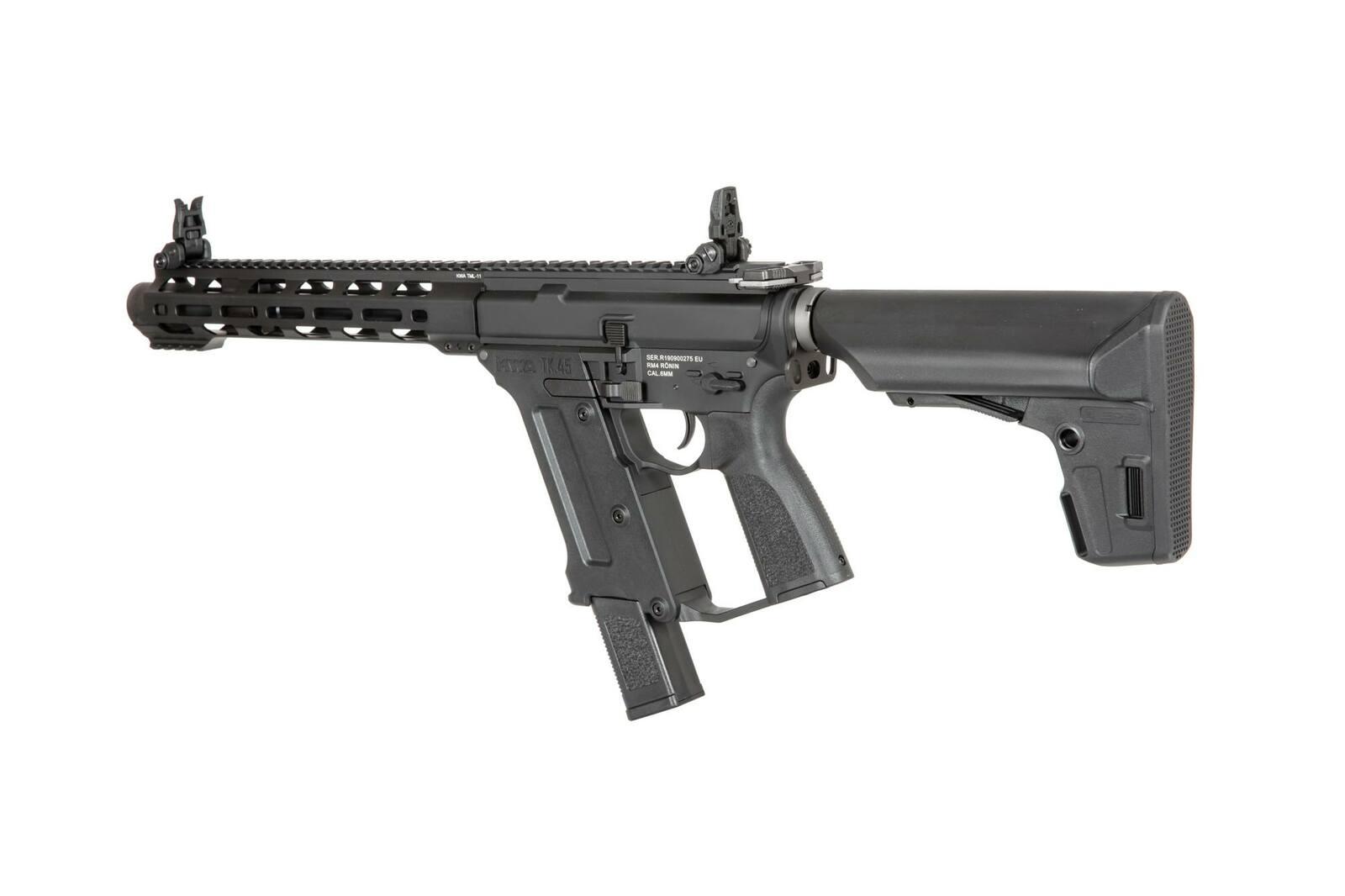 Many thanks too Femme Fatale for the below review

Hey friends!
Welcome back to the blog! I hope you’re all safe and well! Today I have another airsoft gun review for you, and in this post we’ll be looking at the KWA RONIN TK45C from Extreme Airsoft.
The KWA RONIN TK45C is one of the latest models in KWA’s RONIN range of rifles that has been likened to the Krytac KRISS Vector. Since it’s release, it has proven itself to be a popular SMG platform. But is it worth the hype? And is it worth the price?
First up, let’s talk about the externals! Like the other RONIN models the TK45C has a full metal modular upper receiver, an integrated 6” keymod handguard and a picatinny rail on top to add accessories such as red dot sights, included in the box is a set of PTS Enhanced Flip-up Front and Rear Polymer Sights. It also has a PDW style adjustable stock and a stippled polymer pistol grip (which is a nice touch!)
As for the internals, the main feature worth talking about is the new Variable Performance System from KWA. This system makes it easy to adjust the FPS, which is controlled by the VPS System, with tools that are included. It has a 217mm 6.05mm tight bore inner barrel, a rotary style hop-up, safe/semi/full-auto firing modes with an ambidextrous fire selector. It doesn’t have a MOSFET as standard but one can be dropped in pretty easily if you have the tech skills.  The magazine. included has a Switch Cutoff feature that makes this rifle more realistic to use and is an easy indicator when you are out of ammo, it also prevents damage caused by dry fire.
I used the TK45C during a night game at The Department CQB (you can read my full review here) and accessorised it with my Vortex SPARC AR and an X-cortech tracer unit – it’s worth mentioning you can put a tracer unit on a TK45C – there is a little grub screw that needs to be removed. I chrono’d it on 0.2g BBs and it came out at a cheeky 345FPS consistently – perfect for most airsoft sites in the UK. It is a super compact airsoft gun, which means it’s easy to manoeuvre in tight spaces such as corridors and kill houses (a massive help at the Department for sure).
The cut-off feature is a nice addition because it lets you know when to reload but the mag release did seem a little stiff. It was reliable throughout the game with no feeding or mechanical issues. Even though I’m pretty small I did need to have the stock fully extended because of how small it is. It is pretty weighty though (which makes it feel more durable and ‘hardy’) so my arms would be a little tired if I ran this for a full game day with no sling.
What did I like about the TK45C? I love how compact it is – it was really easy to get around a CQB site with, it was fun to shoot and I really like the way it looks – it’s pretty futuristic. Personal opinion: it’s one of the better looking SMGs out there.
Was there anything about it that I didn’t like? I really enjoyed using the TK45C but there are a few things that I believe could be improved on. First up: its’ weight. At 5.9lbs it is quite heavy for the size of it – I don’t think this would be a huge problem for a lot of airsofters out there but I just prefer lighter guns. The mag release was a little sticky so reloading wasn’t as smooth as I would’ve liked it to be but I feel this may improve with time and use. The original battery compartment is also quite small but to combat this I used the Airtech Studios KWA battery extension which gave me enough room to use one of my trusty Titan batteries. This fixed the issue but it is an extra expense so there is that to take into account.
Right now the TK45C is on sale at just £279.99 down from £349.99. The accessories I used included the Airtech Studios TBE KWA TK45 Ronin Tanker Battery Extension which retails for £24.99 and I also used a pack of the KWA Ronin TK45 120 round Midcap Magazines which are £49.99. I think at the current price the TK45C is an absolute bargain, especially considering you can get the gun, battery extension and a pack of 3 magazines for just £5 more than the usual price of the gun. You can also use the code ‘femmefatale’ for an additional 5% off!
Post sponsored by Extreme Airsoft. https://extremeairsoft.co.uk/shop/assault-rifles/electric-aeg-rifles/kwa-ronin-tk45c-6-keymod/